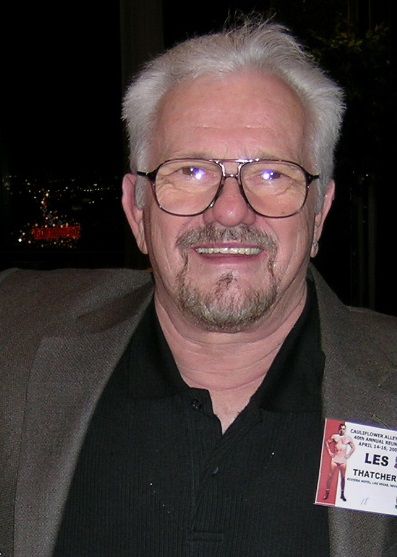 Les Thatcher is an American former professional wrestler. He helps run Elite Pro Wrestling Training, a professional wrestling school in his hometown of Cincinnati, Ohio, with Ricky Steamboat and, up until his death on August 1, 2019, Harley Race. He is also on the board of directors of the Cauliflower Alley Club. He won several regional tag team championships with various partners, including Nelson Royal and Roger Kirby. He turned his hand to singles competition as a junior heavyweight.

Thatcher was born in Cincinnati, Ohio. He first watched wrestling when he was eight years old while at a friend’s house, stating, “The action on that little ten-inch black & white screen just reached out and grabbed me”. In his youth, he played basketball, baseball, and football. He started wrestling at his local YMCA as a twelve-year-old. He attended Central High School in Cincinnati.

Thatcher heard about Tony Santos, a promoter and owner of a wrestling school in Boston, Massachusetts. Shortly thereafter, he began training in February 1960. On July 4, 1960, Thatcher made his professional wrestling debut against “Cowboy” Ronnie Hill in Blue Hill, Maine.

In 1966, Thatcher started to work as part of a “cousins” faction. He was a member of the team with Roger Kirby and Dennis Hall. They used this gimmick in various southern territories until 1969.

In the 1970s, Rudy Kay brought Thatcher to the Maritimes territory. This was the only time in his career that he worked as a heel (villainous character). It was in the Maritimes that Thatcher also began announcing matches. Afterward, he worked with Jim Crockett‘s Mid-Atlantic Championship Wrestling, announcing with Gordon Solie.

In 1994, Thatcher worked as an announcer for Smokey Mountain Wrestling in East Tennessee. He also ran the Heartland Wrestling Association beginning in the 1990s. He also created & produced the Brian Pillman Memorial Show. He also operates professional wrestling training seminars and weekend camps under the Elite Pro Wrestling Training banner.

From 1955 to 1966, he competed in NHRA drag racing, winning 100 trophies and two regional championships. In his late 40s and early 50s, he competed as a bodybuilder with NPC Masters Bodybuilding. He helped produce the first wrestling T-shirt in 1972 and helped publish the first color edition of WWWF Magazine in 1978.

In 1999 Thatcher appeared in an episode of the MTV Series True Life called “I’m A Pro Wrestler”. He was elected onto the board of the Cauliflower Alley Club. Thatcher co-hosted a weekly wrestling radio program with Doc Young called Wrestling Weekly from 2005 to 2008. New editions of Wrestling Weekly are now being released as weekly podcasts found on the Wrestling Observer website. He also does routine website audio shows for PWInsider. Thatcher also appeared in an episode of To Tell The Truth.